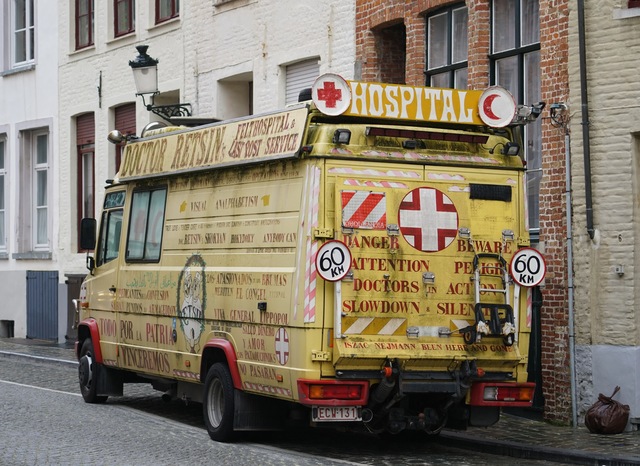 I lived the first 31 years of my life in Canada, which has public health care. Now I am in the USA, which has private. USA health care is very good if you have good insurance, but the inefficiencies of the system result in inferior care for many people, and an extremely high price for everybody. As such, single payer systems (ie. public health plans) are getting more discussion in the USA. I won't resolve that debate in this short post, but I believe the key points for both sides -- both of which are true -- are as follows:

In many countries with public care, there is debate about whether to allow private clinics. In theory (though not always in practice) private clinics are not allowed to provide the services of the public system, and "extra billing," where a doctor charges you the difference between the government rate and the rate they want is forbidden.

In other countries there are parallel private clinics. Last year in France I visited a public french ER, and while the doctors were good, there was 9 hours of sitting around for a few short interactions with the doctor. To follow up I went to a private clinic that was expensive by French standards but cheap by USA standards.

Private lines at the TSA

There might be an interesting solution by looking at the model of the private security lines at US airports. In most airports there are special lanes for elite passengers. In addition, there are services like "Clear" which let you pay a fee to use a private lane with no line and some faster scanning machines. (In addition, there is a TSA run "Precheck" line with shorter lines -- sometimes -- and a faster scanning procedure. That is run by the TSA but airlines can put some elite passengers in it.)

How does this elite line system work in what should be a government system that is supposed to treat all people equally? The TSA set a rule for private lines, which are paid for by their sponsors (airlines or Clear etc.) The addition of a private line must speed up the regular lines so they move faster than they would have if there were not private line. Everybody wins.

That's pretty easy of course. If you add a whole extra station, you're taking the elite passengers out of the regular lines and so those lines are going faster. Even if you only paid for a portion of a new line, it would still be a win for all.

Lines like the Clear line offered a different approach. Clear was created when GE made some special scanning machines which could scan people faster. But the machines were expensive, and so the TSA could not buy them for all lines. If a paying customer goes through more quickly with the fancy machine, that speeds up the trip for everybody behind them in line. If they barge to the front of the line, it can still work if total line capacity was increased.

That's not easy, but it should be possible. As with the TSA, every person who goes into a private clinic is reducing the load on the public ones. If they have to pay the full freight, that's an easy win, but that isn't entirely fair -- everybody should get access to the same basic amount of care money if we can. Consider three options for a procedure which costs $1,000 at the public clinics, all paid for by public insurance.

Option #1 is common in many places. Option #2 is "extra billing." Option #3 might be tuned to a percentage that demonstrates the private patient is still helping the public system -- they still contributed (in taxes or premiums) to the mandatory public system, but they got less benefit from it, thus subsidizing it.

One objection to private systems is that they drain the best doctors and resources from the public system, reducing its quality even while subsidizing it. Some possible answers to that might include:

All of these solutions are just examples, attempts to meet the guiding principle: Whatever you do, it needs to improve the public system. If you can do that, you are free to create whatever private system you like, and generate all the benefits that brings.

In addition, the competition should be good for both systems. If the public clinic is "free," the private one has to really work to earn its extra costs. There is less incentive for the public clinics to improve, however, other than policy mandates that come when the public complains about how much better the private clinics are.

"The expensive private system is the origin of much of the world's very best care, and the innovation in drugs, equipment and procedures that makes the world's system possible. "

This is at least debatable.

Yes, it is debatable

And it is debated. However, for the purposes of this proposal, I want to just presume it. If the existence of the high end high cost health system in the USA is not providing any benefit to the world, then there is less need for a hybrid system.

But there is no question that the wealthy of the world, even in countries with decent health care, still come to the high end US clinics for treatment, and it is viewed as the gold standard. Not general US health care, but the elite segment of it. And as I said, in Paris, I decided to go to the "American Hospital of Paris" rather than the public hospitals, and there was definitely a difference. L'Hopital Americain is not American, it uses that name because it gets itself certified to the US standards, and it attracts clients from not just France.

What is the difference?

I don't know the system in France. Does the "elite" care provide better medical treatment, or is it just reduced waiting, less choice of food, no single rooms, etc?

I would suspect a lot of it is indeed the better service. The doctors at the private clinics are paid more so one presumes they are also superior but that's harder to measure.

"But there is no question that the wealthy of the world, even in countries with decent health care, still come to the high end US clinics for treatment, and it is viewed as the gold standard."

Wealthy from, say, Saudi Arabia, sure. Why do they come? Better medical treatment, more luxury, or both?

What about people from, say, Germany or the UK? Do they come? If so, why?

I doubt many Germans come. Long distance travel for health care is not just expensive, it's a lot of hassle. If you have very good care at home, it takes a lot to convince you to travel to get something that is the best. If you have poor or medium care, then you will look around the world for the best. The USA is the common choice.