I'm pleased to announce that Tilt5, an augmented reality company for which I am an investor and advisor, has gone live with its kickstarter today. 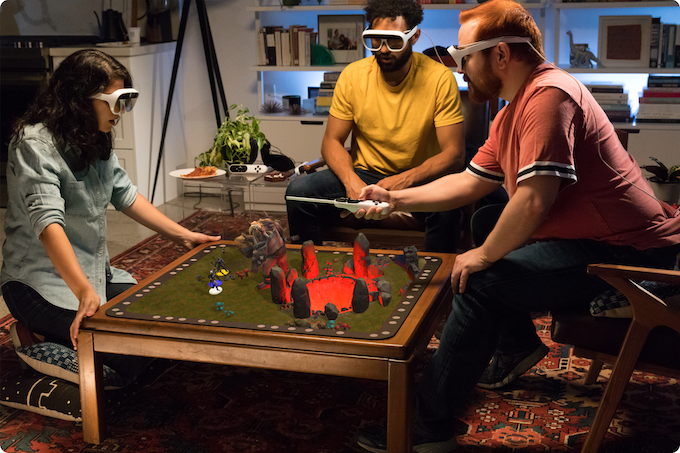 Tilt5's approach to AR is quite different from the others you've seen. The glasses require you place an inexpensive sheet of retroreflector on a surface (table, wall or stand) and it can display anything in 3D where that surface is. Real world objects can then be placed on the table and mix with the virtual ones. This may seem quite limiting, it doesn't try to paint things on top of the arbitrary world like Magic Leap, but it has some big advantages because of this method:

The first focus is on tabletop games. You get a magic table which can turn into anything, and you can place game pieces on it to mix with the virtual. In addition, you can play with people in other locations, all seeing the same magic table.

In the future, I think there will be interesting applications in meetings, with a group of people able to sit around a shared table and see not just the table but the other people. Good for video conferences, or playing poker, or sharing a virtual dinner.

Check out the kickstarter -- it is just on the verge of funding after less than a day!

"for which I am an investor

"for which I am an investor and advisor, "

OK. What is your track record as an angel investor? The wins as well as the duds? And what is your portfolio return from this activity?

What are the reasons that someone should listen to you?

There is only one way to interpret that.

People looking at the kickstarter should look elsewhere. Caveat Emptor.