The future of computer-driven cars and deliverbots

Some time ago I proposed the "School of Fish Test" as a sort of turing test for robocars. In addition to being a test for the cars, it is also intended to be a way to demonstrate to the public when the vehicles have reached a certain level of safety. (In the test, a swarm of robocars moves ona track, and a skeptic in a sportscar is unable to hit one no matter what they do, like a diver trying to touch fish when swimming through a school.)

This press release describes a European research project on various intelligent vehicle technologies which will take place next year. As I outline in the roadmap a number of pre-robocar technologies are making their way into regular cars, so they can be sold as safer and more convenient. This project will actively collect data to learn about and improve the systems.

Tonight, at 111 Minna Gallery in San Francisco, we at EFF will be hosting a reading by Randall Monroe, creator of the popular nerd comic "xkcd." There is a regular ticket ($30) and a VIP reception ticket ($100) and just a few are still available. Payments are contributions to the EFF.

I have mostly written about 3 and 4 wheeled Robocars, even when the vehicles are narrow and light. Having 3 or 4 wheels of course means stability when stopped or slow, but I have also been concerned that even riding a 2 wheeled vehicle like a motorcycle requires a lot of rider participation. It is necessary to lean into turns. It's disconcerting being the stoker on a tandem bicycle or the passenger on a motorcycle, compared to being a car passenger. You certainly don't imagine yourself reading a book in such situations.

On the other hand 3/4 wheeled vehicles have their disadvantages. They must have a wide enough wheelbase to be stable because they can't easiliy lean. In addition, for full stability you want to keep their center of gravity as low as you can. The extra width means a lot more drag, unless you have a design like the Aptera Motors entrant in the Progressive 100mpg X-prize, which puts the wheels out to the sides. 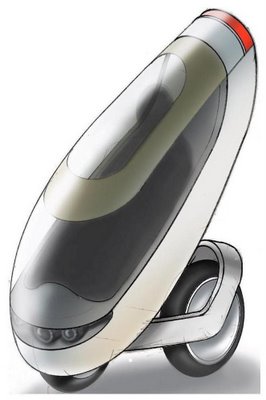 I recently met Chris Tacklind, who has a design-stage startup called Twill Tech. They have not produced a vehicle yet, but their concepts are quite interesting. Their planned vehicle, the Twill, has two wheels but uses computer control to allow it to stay stable when stopped. It does this by slight motions of the wheels, the same way that pro cyclists will do a track stand. They believe they can make a 2 wheeled electric motorcycle that can use this technique to stay stable when stopped, though it would need to extend extra legs when parked.

This is intended to be an enclosed vehicle, both for rider comfort and lower drag. The seat is very different from a motorcycle seat, in that you do not sit astride the vehicle, but in a chair similar to a spacecraft's zero-G chair.

In addition, the vehicle is designed to have the rear wheel on a lever arm so that it can stand almost upright when stopped and then slope down low, with the rider reclined, at higher speeds. The reclined position is necessary for decent drag numbers at speed -- the upright human creates a lot of the drag in a bicycle or motorcycle. However, the upright position when slow or stopped allows for much easier entry and exit of the vehicle. As everybody knows, really low cars are harder to get in and out of. Twill is not the first company to propose a vehicle which rises and lowers. For example the MIT CityCar plan proposes this so the vehicles can stack for parking. Even without stacking, such designs can park in a much smaller space.

One of the questions raised by the numbers which show that U.S. transit does not compete well on energy-efficiency was how transit can fare so poorly. Our intuition, as well as what we are taught, makes us feel that a shared vehicle must be more efficient than a private vehicle. And indeed a well-shared vehicle certainly is better than a solo driver in one of todays oversized cars and light trucks.

But this is a consequence of many factors, and surprisingly, shared transportation is not an inherent winner. Let's consider why.

We have tended to build our transit on large, heavy vehicles. This is necessary to have large capacities at rush hour, and to use fewer drivers. But a transit system must serve the public at all times if it is to be effectively. If you ride the transit, you need to know you can get back, and at other than rush hour, without a hugely long wait. The right answer would be to use big vehicles at rush hour and small ones in the off-peak hours, but no transit agency is willing to pay for multiple sets of vehicles. The right answer is to use half-size vehicles twice as often, but again, no agency wants to pay for this or to double the number of drivers. It's not a cost-effective use of capital or the operating budget, they judge.

The urban vehicle of the future, as I predict it, is a small, one-person vehicle which resembles a modern electric tricycle with fiberglass shell. It will be fancier than that, with nicer seat, better suspension and other amenities, but chances are it only has to weigh very little. Quite possibly it will weigh less than the passenger -- 100 to 200lbs.

Transit vehicles weigh a lot. A city bus comes in around 30,000 lbs. At its average load of 9 passengers, that's over 3,000lbs of bus per passenger. Even full-up with 60 people (standing room) it's 500lbs per passenger -- better than a modern car with its average of 1.5 people, but still much worse than the ultralight.

The thesis of the essay is simple. The quest for flying cars has always had to deal with the very difficult compromise between a vehicle that flies and one that drives. It's just really hard to make one vehicle to do both.

Here's a nice story about the Kiva warehouse delivery robot now being used by major retailers like The Gap. Factory floor robots have been around for some time, and the field even has a name "automated vehicle guidance systems" but these newer deliverbots kick it up a notch, picking up shelves and bringing them to a central area for distribution, finding their way on their own with sensors.

I've added a new concept to the notes section -- the Robo Snow Plow. In the article I describe the value of plows that can patrol the roads frequently without need for staff. Since you don't want to delay for recharging, these might be fuel-tank powered.

I'll be giving a talk on Robocars on Friday, January 16th at the Bay Area Future Salon which is hosted at SAP, 3410 Hillview, Building D, Palo Alto CA. Follow the link for more details and RSVP information. Reception at 6, talks at 7. Eric Boyd will also talk on efficiency of transportation.

I gave a few visits to the RoboDeveloper's conference the past few days. It was a modest sized affair, one of the early attempts to make a commercial robot development conference (it's been more common to be academic in the past.) The show floor was modest, with just 3 short aisles, and the program modest as well, but Robocars were an expanding theme.

This week, as part of a 3-part series on the future of driving, ARS Technica has written a feature article derived from, and covering my series on Robocars. While it covers less than I do here, it does present it from a different perspective that you may find of interest.

I've added a new Robocars article, this time expanding on ideas about how parking works in the world of robocars. The main conclusion is that parking ceases to be an issue, even in fairly parking sparse cities, because robocars can do so many things to increase, and balance capaacity.

Readers of this blog will know I used to talk a bit about Personal Rapid Transit (PRT) but have switched to a belief that it is now likely that robocars might fulfill the PRT vision before actual PRT can. To understand that, it is necessary to explore just why PRT has never really come about, in spite of being promoted, and possible for almost 40 years.

This special chapter in my series of essays on Robocars describes a fictional week in the Robocar world, with many created examples of how people might use Robocars and how their lives might change.

If you haven't been following my essay on Robocars, this may be a good alternate entry to it. In a succinct way, it plays out many of the technologies I think are possible, more about the what than the how and why.

For part seven of my series on Robocars, I now consider the adjunct technology I am calling Deliverbots -- namely robot driven trucks and delivery vehicles, with no people inside. These turn out to have special consequences of their own. Read: For part six of my series on Robocars, consider:

When can robocars happen?

I discuss what predictions we can make about how long the Robocar future will take. While there are many technological challenges, the biggest barriers may be political, and even harder to predict.

For part five of my series on Robocars, it's time to understand how this is not simply a utopian future. Consider now:

The Downsides of Robocars

Robocars will suggest a great number of possible changes in the way we design and market cars. I now encourage you to read:

Automobile design changes due to Robocars For part three of my series of Robocars, now consider:

Roadblocks on the way to Robocars

A lot of obstacles must be overcome before Robocars can become reality. Some we can see solutions for, others are as yet unsolved. It's not going to be easy, which is why I believe an Apollo style dedication is necessary.